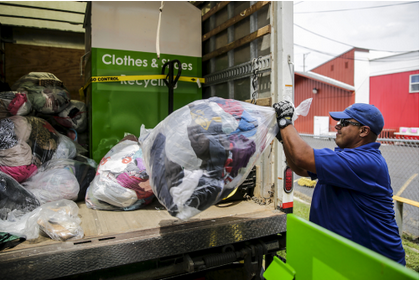 The city of Joliet this year started regulating the collection boxes for old clothes seen in parking lots.

One major textile recycler in the area said it welcomes the new rules.

"We want regulation," said Mattias Wallander, CEO for USAgain, a West Chicago-based recycler that has been in business since 1999. The for-profit company has 12,500 collection boxes in 19 states.

Wallander acknowledged there can be problems when collection boxes are not monitored and emptied on a regular basis.

"Over the last five years, there's been some growth in the industry - some new companies," he said. "It's due for regulation."

The business has been so unregulated that some operators have put boxes on sites without permission, said Kendall Jackson, director of planning for Joliet.

"There's operators out there who we don't know who they are because there's no information on the boxes," Jackson said.

The Joliet ordinance requires a permit for collection boxes. It also requires that boxes have contact information and be kept clean, so they are not overflowing with junk or garbage.

Box operators were operating so freely, Jackson said, that some property owners were unsure if they could remove the bins, even if they never gave permission for them to be there and the boxes were creating a mess.

"When we started the program, we got calls from property owners saying, 'Can we move these?' We'd say, 'Well, it's your property. Talk to your legal counsel and do what you need to do,'" he said.

The company has been operating in Will County forest preserves for four years - with permission. USAgain also has bins in Bolingbrook and several other Chicago suburbs. It even has a curbside textile recycling program in St. Paul, Minnesota.

USAgain puts its name and contact information on its collection boxes. Its employees collect clothes wearing a uniform and driving a vehicle bearing the company name.

Wallander said there is a need for textile recyclers.

"Wherever you find bins, they are used," he said. "That's a really convenient way for people to get rid of their textiles."

Wallander said there is not a big profit margin in textile recycling. But there appears to be room for growth.

According to Wallander, about 85 percent of old clothes get thrown in the garbage. That leaves a lot of opportunity for recycling."Over the last 30 years, we've really gotten into the habit of recycling our paper, cans and glass. No one even thinks of throwing that away anymore," he said. "For textiles we don't have that."

USAgain wholesales the clothing it collects to companies called graders that sort it into categories. There are 10 categories for women's blouses, Wallander said.

"They're able to send winter clothes to Russia and summer clothing to Africa and the really high vintage stuff to London," he said.

Despite the number of thrift stores you might see, the market for used clothing in the United States is not considered very large, Wallander said. Used shirts and pants appear to be one area in which the U.S. has a trade surplus.

"We are part of a global economy," Wallander said. "Our surplus can be used elsewhere."