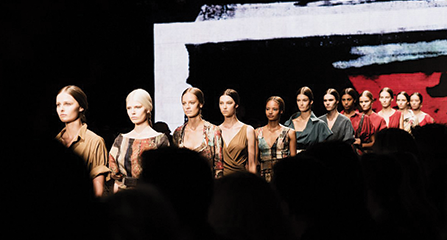 It was the best of times. It was the worst of times. Like a storyline from a Charles Dicken's novel, this Fall's Fashion Week was the epitome of the aristocracy living high on the backs of proverbial peasants. It showcased the most picturesque beauty and glamour while masking its fatal flaw. The depth of its brazen, unbridled excess spans the globe in the modern-day version of "A Tale of Two Cities," exposing the divide between the rich and poor, consumption and finite resources, and the choice of life over death.

Clothes showcased during this well-attended (estimated 7,500 attendees, 6.5 million social media reach, 275 million media impressions) week of events in this year's fashion cycle become the go-to styles for the elite. Cheaper knock-offs make their way into the fashion chain, accelerating global fashion production to the tune of 80 billion garments annually. In 2012, the fashion market was valued at $1.7 trillion worldwide, according to Fashion United. Individual fashion icons like Nike, H&M, Prada, Adidas, Zara, and Ralph Lauren are some of the greatest benefactors, as each made the 2015 Forbes list of the most valuable brands, and are collectively worth more than $70 billion.

It was the age of wisdom. It was the age of foolishness. Under the veil of ignorance, consumers purchase goods while they are unaware of their source. Major clothing brands often contract with factories in developing countries to produce garments in mass quantities because labor is cheaper. Millions of garment workers work in unsafe conditions for long hours and low pay, with some making as little as $3 a day. The plight of garment workers has been brought to the world's attention due to tragedies around the globe. In 2014, three people were killed when police opened fire on garment workers in Cambodia who were protesting to gain an increase in their minimum wage which was $160 a month. It is one in a series of tragedies that have hit garment workers hard. The global backlash has prompted little change in the workplace culture of some factories that have historically permitted physical abuse of workers who questioned the status quo.

While major brands have worked diligently to fight for a fair living wage and safer conditions at factories they contract to sew clothing, monetary gain supersedes social action. Some brands do just enough to make a public relations statement that they are sustainable. Often, a fair living wage is calculated using the lowest possible wages as indicators, leaving many workers in poverty.

It was the season of light. It was the season of darkness. How does one judge the brands when our individual lives are often measured by our ability to consume goods? The better side of our nature shouts for justice for the disenfranchised and brutalized. Yet, the consumer within us craves the beauty of new, glamorous clothing produced in a broken system which often disregards the people who make them.

Our collective global desire is for trendy, disposable clothing. Fast fashion is a quick fix to quiet the junkie within that just wants to look good at any expense. As is common with addiction, the desire for new, better, and more is never satisfied. New fashions are introduced into the global supply chain at a higher rate. This creates a drain on our planet's natural resources, including water. The real cost is far beyond the $5 paid for a Prada knock-off at the local retail store.

It was the spring of hope. It was the winter of despair. Five million people die each year from poor drinking water or from water shortage. The textile industry uses enormous amounts of water. India alone uses 425,000,000 gallons of water everyday to process fabrics, according to Sustainable Communication. Beyond water consumption, water and ground pollution are prevalent in the industry, straining an already limited global water supply. Greenpeace estimates only 2.5 percent of the planet's water supply is fresh water.

We had everything before us. We had nothing before us. Once discarded, each item of clothing that finds its way into a landfill contributes to carbon emissions. The EPA estimates that the textile industry recycles 3.8 billion pounds of textile waste yearly, only 15 percent, leaving 85 percent to decompose. The resulting climate change from increased heat-trapping gases is creating intense and deadly conditions. US News reports that 100 million could die from climate change by 2030.

Fashion Week presents an opportunity to grasp the total picture of fashion in all its beauty and deeply flawed aspects. On one end lies earth's possible destruction caused, in part, by pollution created from too many clothes. On the other end of the scale is the possibility that we develop a global commitment that the social-economic and environmental costs of fashion are overtaken by the collective expression of sustainable practices.