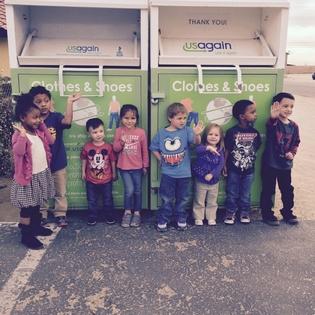 It seems like the three Rs everyone learns in school — reading, writing and arithmetic — have now expanded into two more to include recycling and re-using.

Every year, the for-profit Anaheim-based company USAgain aims to teach youngsters to recycle and re-used through its America Recycles Day Challenge competition during October and November.

This year, two High Desert schools walked away with top prizes in the contest. Progressive Play Preschool in Hesperia came in first and won $250. Mountain View Montessori School in Victorville took second and was awarded $100.

“This is exciting news for us and a big blessing,” said Sherri Threatt, owner and administrator of Progressive Play Preschool. “We will be using the prize money for new outside equipment for the kids, such as balls and hula hoops. Every time we win any money, we always put it back into things for our students.”

Ann Martens, a second- and third-grade teacher who heads up the recycling programs at Mountain View Montessori, said the win really took her by surprise.

“We are a small school with only about 200 students, so this is quite an accomplishment for us,” said Martens. “But our kids are very passionate about recycling and they all rose to the challenge of USAgain’s contest. We’re very proud of them.”

According to Mattias Wallander, CEO for USAgain, America Recycles Day Challenge works by placing and servicing collection bins at each participating school, which all receive revenue based on total pounds collected. The schools who collect the highest amount of pounds of clothing are named the winners.

“Eighty-five percent of all unwanted clothing in the U.S., or more than 12 million tons, is thrown into the trash and buried in landfills each year with the average individual discarding some 70 pounds of textiles annually, according to the U.S. EPA,” said Wallander. “Nevertheless, the 15 percent of clothing that does get a second life is the equivalent to taking 1 million automobiles off the road for a year.”

Wallander said 119 schools in California participated in USAgain’s Recycles Day Challenge. In total, 62,600 pounds of clothes were collected and 939,000 pounds of carbon emissions were prevented from entering the atmosphere, according to Wallander.

USAgain, a leader in the textile recycling industry since 1999, recycles and reuses clothing, shoes and other textiles. Its mission is to provide consumers with a convenient and eco-friendly option to rid themselves of excess clothing, which is diverted from landfills.

In 2014, USAgain collected 54 million pounds of textiles for reuse and recycling. The organization maintains more than 10,000 collection bins in 16 states and has an A+ rating from the Better Business Bureau.

For more information and to find out where recycling containers are located, visit www.usagain.com