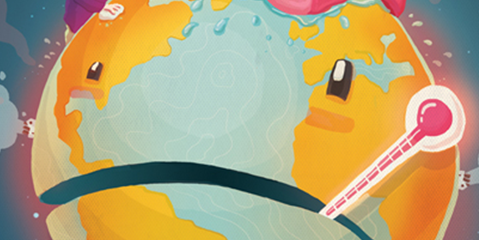 This decade, the planet is experiencing severe weather events unlike any other point in recorded history. Some scientists predict that the resulting physical and economic damage caused by these climate-change indicators is just the tip of the iceberg compared to what's coming down the pike.

A swirling accumulation of mango-sized hail, torrential rain, and several tornadoes hammered residents of Colorado this month. According to Noah Diffenbaugh, an associate professor of Scientific Earth Science at Stanford University, global warming will continue to produce an increasing number of days where conditions are ripe for creating dangerous mega-storms.

Scientists have found two main factors contributing to severe thunderstorms. One is convective available potential energy or CAPE, which is created when air warms in the lower atmosphere. The warm air carries moisture to higher altitudes as it rises. Secondly, when CAPE meets a strong wind current, a storm can evolve from the mix of wind, moisture and energy.

One-hundred fifty people died in Ghana this month when an explosion rocked a gas station where they were huddled while trying to escape heavy rain pour. Some that survived the explosion were swept away with gushing waters from unprecedented flooding, according to CNN's Faith Karimi and Chris Lett. In 2011, 11 inches of rain in Rio de Janeiro, within 24 hours, caused a mud slide that buried hundreds of people, and left 1,000 homeless. Last year, extreme floods, linked to El Nino and climate change, devastated China, displacing half a million people, according to CNN.

Floods are caused by different factors. Pollution and deforestation play a role in some floods. Large-scale deforestation can loosen soil and cause flooding. Urbanization generally adds concrete surfaces, which seal the ground, leaving nowhere for water created by mega-storms to go, according to Hartmut Jungius of WWF.

Most tornadoes are the result of rotating thunderstorms, also called super cells. They can reach wind speeds of 250 mph. According to Live Science's Nola Taylor Redd, 800 tornadoes are reported annually. They cause more than 80 deaths and 1500 injuries per year.

In 2011, the estimated cost of weather related damage worldwide was $150 billion, 25 percent higher than 2010, according to Miller. He says, in the U.S., insured losses from natural disasters totaled $36 billion, 50 percent more than the previous year.

Scientists predict that global warming will cause a strong increase in the conditions that create extreme weather events over the next century. In a process called evapotranspiration, global warming causes the wet places to get wetter and the dry places to get dryer, according to Climate Hot Map. As the world warms, water evaporates into the atmosphere from land, water surfaces and plants.

A dense layer of water vapor, carbon dioxide, methane and other gases protects the earth from the freezing cold of the universe. Human activities create more heat-trapping gases and increase the earth's temperature every year. The resulting global warming is the cause of climate-change indicators that make the earth less inhabitable.

According to Climate Hot Map, desert areas will expand as warm air continues to rise in the atmosphere and storm patterns shift. Scientists say we can expect a 30 percent decline in water resources by mid-century in drought-plagued areas, if climate change is not addressed. A decrease in water resources will mean more disease and death in many areas of the world.

While more frequent extreme weather events cause catastrophes, killing thousands every year, most of the people who die from climate change (estimated at over 400,000 per year) do not make headlines. In the second edition of the report "Client Vulnerability Monitor: A Guide to the Cold Calculus of a Hot Planet," researchers concluded that 90 percent of the mortality occurs in developing countries. The impact to low-income communities is extreme poverty, threats to food security, child and maternal health, and the prevalence of infectious disease.

Pollution by humans causes climate change, and it is creating almost unthinkable tragedies for humanity. The solution lies in individual and common commitment to sustainable living.